An Army Veteran who served in World War II, Harold returned to ranching after he was discharged. He later bounced around from ranch to ranch across Wyoming and Montana as a ranch hand, eventually landing at Amsden Creek Ranch in Dayton, Wyoming where he was ranch foreman. It was here,  that he met Jean Alice “Mitzie” Butz who ran the associated dude ranch next door.
Jean Alice Butz was the only daughter of a wealthy Chicago area entrepreneur. Born at the Cook County Hospital and adopted by the Butz family at birth, her early life could not have been more different than Harold’s. Mitzie, as she was known, attended private schools in Highland Park, Illinois and Scripps College in Claremont, California. An avid field hockey player through high school and college, Mitzie contracted a severe case of polio in her early 20s and suffered some physical impairment as a result. 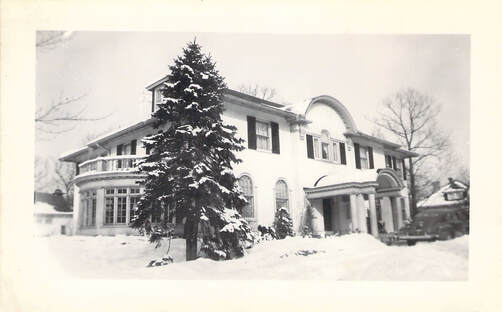 Mitzie's childhood home in Highland Park, Illinois
Soon after her bout with polio, her father purchased Amsden Creek Ranch, both the cattle ranch and the dude ranch after visiting on vacation. Her father put Mitzie in charge of running the small dude ranch. The rest as they say, is history.

Harold and Mitzie married in her home of Highland Park in 1954. Looking for opportunities further West, Harold purchased Deep Well Ranch in Prescott, Arizona in December 1954. He chose Deep Well because it was ideally located next to an airport should Mitzie need to fly to Chicago for medical care. Deep Well Ranch became Harold and Mitzie’s home in 1955. 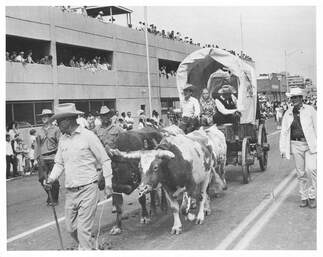 Harold (front) and his oxen at a parade in Tucson, AZ
Once they moved to Prescott, Harold and Mitzie immersed themselves in the local community. Harold was a prominent member of the Yavapai County ranching community. He served on the board of the Yavapai Cattlegrowers’ Association, was a member of the National Cattlemen’s Association and Rodeo Cowboy’s Association. He was also chairman of Prescott’s World's Oldest Rodeo in the 1960s and the Yavapai County Fair. Harold and Mitzie hosted the Cowboy Camp Meeting at Deep Well Ranch each summer until 1968.

Harold was a charter member of the Prescott Corral of Westerners and a Shriner. Harold also served on the board of Yavapai Regional Medical Center, a community hospital, and the board of the Marine Military Academy in Harlington, Texas which the Harold James Family Trust supports in his memory to this day. Mitzie was a member of the Yavapai Cowbelles and PEO Chapter Y.  A generous alumni donor to her high school and universtiy alma maters, Mitzie sat on the Board of Trustees for Scripps College for many years. Both were supporters of 4H, Future Farmers of America (FFA) and the Boy Scouts. Harold would invite local 4H and FFA participants to the ranch to choose livestock for their projects.

Harold was a member of the Yavapai County Sheriff's Posse and would participate in the Prescott parades with the Posse. Harold also had a team of oxen that he enjoyed showing off. He would bring them to parades in Prescott, greater Arizona and California. ​
Harold and Mitzie were friends with George and Louise Phippen. George was a local painter, sculptor and founding member of Cowboy Artists of America. The Phippen Museum of Western Art in Prescott, Arizona sits on land donated by Harold and Mitzie in George's honor. In fact, many of Harold's personal possessions, his camp cook wagon, pots and pans and saddle are currently on display and in the archives at the Phippen Museum.
​ 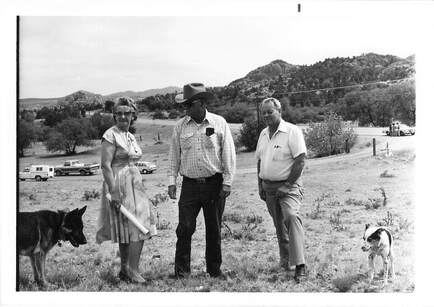 Harold, (center) with Louise Phippen at the future site of the Phippen Museum of Western Art
Harold loved Deep Well Ranch and enjoyed inviting friends to share in its beauty with him. The original ranch only had one building, but Harold expanded over time. One of the buildings Harold added was the line shack. He greatly enjoyed Dutch oven cooking and would invite guests over to cook for them at the line shack. While Harold often had a smile on his face, his smile was biggest when cooking and entertaining guests. Harold was an animal lover and rarely ever seen without his horses, dogs or oxen. ​ 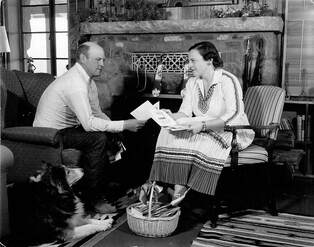 Christmas photo of Harold and Mitzie in front of the fireplace. (1960s)
Mitzie's favorite color was yellow. She did not enjoy being photographed, so the Harold James Family Trust's archives contain more photos of its namesake than Mitzie. A lifelong learner, Mitzie was an avid researcher and amateur genealogist. Interested in both her adopted and biological families, Mitzie spent years researching her ancestors. All of her research is still housed in the archives at Deep Well Ranch, though the “Genealogy House” has been converted to house visiting researchers. She was also greatly interested in religious history and archaeology and supported grant funded research at Crow Canyon Archeological Center in Colorado and Northwestern University. She enjoyed learning from her friend, Dr. Stuart Struever, a noted American archeologist and anthropologist.

After Harold’s death in December 1981, Mitzie chose to continue operating Deep Well Ranch instead of returning to Chicago. She had made her home in Prescott and didn’t want to leave. In 1982, Mitzie formed The Harold James Family Trust in his memory.

Things continued on this way until Mitzie’s death in 2007. Committed to ensuring that Deep Well Ranch would continue to operate as a cattle ranch in perpetuity, Mitzie left both the ranch and her estate to the Harold James Family Trust. A small, private family foundation, the Harold James Family Trust funds projects in the greater Prescott Community in Harold and Mitzie’s honor. ​ 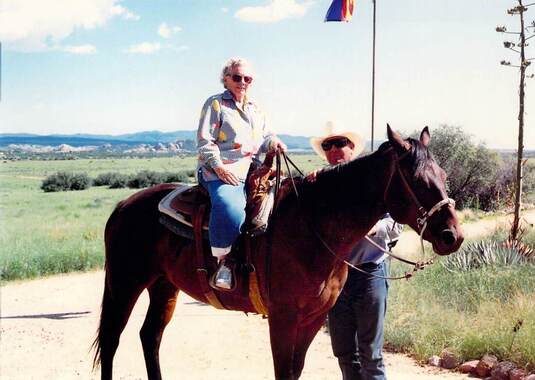 Mitzie with ranch foreman, Bob Burris. Bob has been foreman of Deep Well Ranch for over 40 years